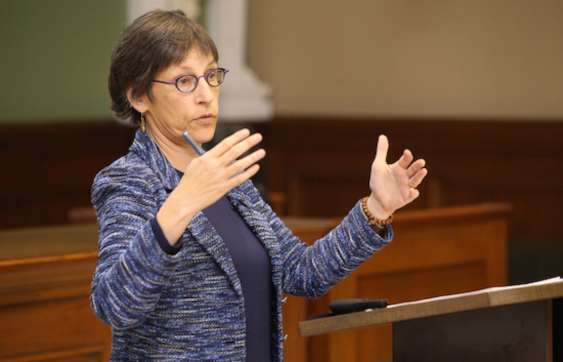 In her 2017 Coxford Lecture, Professor Debra Satz discussed various problems with and challenges to the privatization of public goods.

Satz, the Marta Sutton Weeks Professor of Law and Society at Stanford University, and Senior Associate Dean for the Humanities and Arts, delivered the annual public law lecture to a full house at Western Law on March 9.

Professor Satz focused on two issues in particular: the privatization of education, and the privatization of criminal justice, in the form of prisons. Very broadly, privatization can be understood to involve the shifting of responsibility from public to private entities. So, for example, one way to privatize education is for the government to provide all citizens with education vouchers that they can “spend” on schools of their choice. The state would still pay for education; but private entities would be responsible for actually providing education. (This is the sort of proposal made by Milton Friedman in Capitalism and Freedom and championed by the current US Secretary of Education, largely on grounds of efficiency and choice.)

On the other hand, as Satz noted, some people – such as the Israeli academics Avihay Dorfman and Alon Harel – have argued that certain public goods are simply not the sorts of things that can be privatized at all. For example, it might be thought that criminal punishment is by definition something that must be done by the state. But if that’s right, then any shifting of punishment from the state into the hands of private entities is automatically inappropriate: nobody but the state has the authority or standing to punish.

Satz steered a middle course in her Coxford Lecture. Setting aside “intrinsic” objections to privatization, she challenged the idea that the only consequences relevant to issues of privatization are those having to do with efficiency and choice, noting that privatization has vices along with virtues. To take two examples, what is to be done about hard to educate children, for example? Should private schools be allowed to exclude children simply because they are hard to educate? Allowing this would undermine public commitments to school diversity and choice. With respect to criminal justice, Satz pointed out that privatizing prisons creates perverse incentive structures, where it is in the interest of private prisons to keep prisoners incarcerated longer, and to lobby the government to implement more stringent immigration and criminal sanctions.

“To my mind,” said Professor Andrew Botterell, the Director of the Coxford Lecture, “Professor Satz’s lecture was a fascinating discussion of the variety of problems that privatization gives rise to. Western Law is richer for Professor Satz’s visit, and especially lucky to have a venue like the Coxford Lecture in which academics and jurists can discuss issues of contemporary importance and controversy,” he added.