Bublick Lectures on Creation of Risk and the Duty of Care 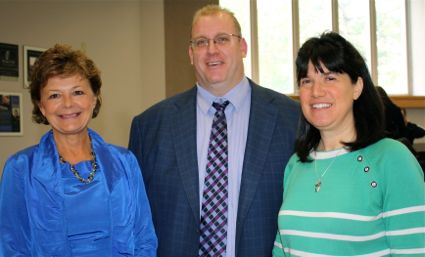 Ellen Bublick, the Dan B. Dobbs Professor of Law at the University of Arizona’s James E. Rogers College of Law, delivered the opening Tort Law Research Group public lecture for the 2013-14 academic year on October 29.

Speaking to an audience of students and faculty members, Professor Bublick (pictured far right with Barbara Legate and Prof. Jason Neyers) provided a useful overview and analysis of the American approach to analyzing duties of care in negligence.

In her presentation, Professor Bublick outlined key differences in American and Canadian approaches to tort law Chief among these is the American focus on deterrence as a central purpose of tort law, serving to “price the conduct” of defendants under an explicitly economic calculus. She then explained the formulation of duty in the Restatement Third of Torts, according to which “[a]n actor ordinarily has a duty to exercise reasonable care when the actor’s conduct creates a risk of physical harm.” On Professor Bublick’s view this test creates challenges for courts in determining what conduct will be held to create such a risk, and renders cases on this issue difficult to explain coherently.

Professor Bublick is a co-author of the leading tort law treatise The Law of Torts (2d ed. 2011) and a co-author of the popular casebook Torts and Compensation. She serves as an Advisor to the American Law Institute’s Restatement Third of Torts. She holds degrees from Duke and Harvard and clerked for the Seventh Circuit Court of Appeals.

The Tort Law Research Group’s public lecture series is generously sponsored by Legate and Associates LLP. Founding lawyer Barbara Legate, a graduate of Western Law, leads a firm that uses a client-centred team approach focused on getting to know each client and assuring that he or she feels empowered. She has argued significant cases in a wide variety of situations, from administrative tribunals to the Ontario Court of Appeal. She was named 2010 Lawyer of the Year in Personal Injury Litigation.